The historical site of Neve Ilan is located on a hill about 700 meters above sea level. This hill is part of the Judean Hills that slope downward from Kiryat Yaarim to the Ayalon Valley.

The site was established 12 km west of Jerusalem and 6km east of Sha'ar Hagay near Route 1 (the main Tel Aviv Jerusalem Highway) with a spectacular panoramic view of the Judean Hills on the one side and the coastal plain up to the Mediterranean Sea on the other.

In 1946, before the announcement of the partition of Palestine and two years before the founding of the State of Israel, Ben Gurion realized the importance of the establishment of Jewish settlement outposts that will protect the road to Jerusalem. The communities of Motza, Kibbutz Kiryat Anavim and Kibbutz Maaleh Hahamisha already existed but because of their topographical location they could not protect the road to Jerusalem. The road was controlled by dozens of Arab villages including Bayt Saris and Bayt Mahsir who actively attempted to close the road.

Influenced by Ben-Gurion, the Jewish National Fund purchased some land from an Arab Effendi from Abu Gosh who lived there and kept livestock while guarding the area between Kibbutz Maale Hahamisha in the east and Kibbutz Hulda in the west.
Since the surrounding land was not suitable for agriculture, terraces, orchards, and forests did not exist and there were no cultivated fields.
The acquisitions of land were mainly for security considerations in order to establish an outpost that combined agriculture with defending the road to Jerusalem.

The Neve Ilan Kibbutz Outpost was founded in October 1946 and settled by 31youngsters – 17 boys and 14 girls - mainly Holocaust survivors and veterans of the anti-Nazi Maquis resistance movement from France. In 1944, wanted by the Nazis they fled to Spain and from there sailed to Palestine.

This pioneer unit underwent agricultural training at Kibbutz Degania Bet, Kfar Ruppin and at Givat Bussel Hadera. In the autumn 1946 this group with some workers from Solel Boneh settled at "Ice Hill" which was the nickname for the hill west of the present day Neve Ilan. At first they lived in tents and later in two huts.
All that existed there before was a stone house "Chirbat el Hawaii" that belonged to a Turkish Effendi in the 19th century. This building was used as a dining room, a kitchen, a clinic and a meeting room where discussions were held on issues such as the day to day problems of survival, the development and protection of the kibbutz.

At first good neighborly relations with the local Arabs were maintained. Disagreements ended in small fights based on thefts and damages caused by the flocks of livestock belonging to the Arabs.

Life at Neve Ilan was not easy. Water was brought by truck once a week and poured into a cistern in the courtyard. The nights were dark without electricity. It was hard to make a living from agriculture and the group's problems were influenced by the situation in the country. The war between Jews and Arabs began when the British decided to leave. By the end of November 1947, the Arabs cut off the road to Jerusalem, and thus began the food convoys to the besieged city. Between Neve Ilan and Kibbutz Hulda, a distance of tens of kilometers, the Arab took control of the mountain range thus closing the crossing from Bab el Wad (Sha'ar Hagay) to the hill on which Neve Ilan was located which was the most forward outpost.

With the help of the workers of Solel Boneh who stayed on the kibbutz until the end of the War of Independence, the rock near the Effendi house's cistern was excavated. Defense trenches 1.70 meters deep and 400 meters long were built all the way around the mountain as well as 20 concrete posts near the trenches.

In late November 1947, there were 35 members on Neve Ilan, mostly young people. In their possession they had 17 rifles like the "Sten Gun" and a few grenades. Being only a few in number and in a hostile area, assignments were difficult and everyone was busy with the running of the kibbutz and security missions such as ambushes on the main road and the surrounding hills. At the beginning of December 1947, Eliezer Schwartz was killed by gunfire from the direction of Bayt Thul. He was the first fatality among the members. He was shot while plowing a field, together with two women, on the slope of the mountain. 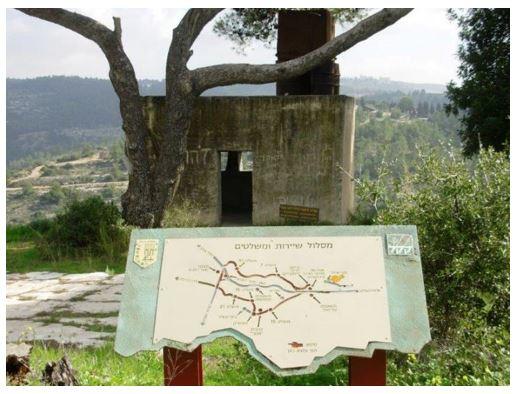 Kibbutz Neve Ilan was a vital base for the Palmach and for the protection of the area during the struggle for the convoys to move to Jerusalem. Also an important communications position when the contact between Tel Aviv and Jerusalem was lost. As part of Operation "Maccabi" (8 May 1948) Palmach fighters came to Neve Ilan to prepare for the occupation of the village of Bayt Saris and the western approach to Sha'ar Hagai. Around the 15th of May, 1948, during fierce battles for the road to Jerusalem, a generator was brought, lighting the hill and a fence surrounding it, thus proclaiming "Here exists a Jewish settlement." In late May, 1948, the Arab Legion started heavy shelling from Kfar Yalu causing much damage to the outpost. 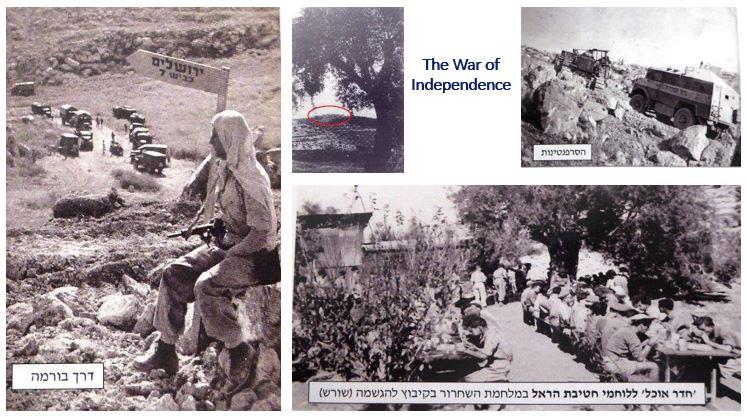 After the War of Independence in July 1949 Neve Ilan progressed economically with the development of a dairy and poultry farm and growing mushrooms in the shelters and fortifications. The existing core of members was joined by a group from Algeria and France that came on the ship "Exodus" and who were trained at Kibbutz Geva. In 1949, the number had reached 120 members.

The community expanded and settled outside the boundaries of the outpost. Even though the kibbutz was progressing and becoming more established economically, socially the kibbutz started to disintegrate. During the years of the siege social tensions built up. A lack of leadership alongside the strong individualistic character of the members led to a crisis, and finally to a the disintegration of the community. The kibbutz was deserted between 1953 and 1956. Attempts were made to resettle the kibbutz in the following years but were not successful. One of the endeavors was a branch of the agricultural school Hakfar Hayarok but that was disbanded in 1967.

At the end of the 1960's, a settlement group, "Hamagshimim" from the Young Judea Youth Movement in the United States was established. The first members came to Israel in 1970 to establish the cooperative settlement of Neve Ilan.
For four years the core members lived in Mevasseret Zion absorption center, until the houses at Neve Ilan were built. A small group of six families decided to settle the area in 1972 and renovated the old buildings from the deserted kibbutz. When the construction of the houses was completed, all the families from the absorption center and those living in the old houses of the kibbutz moved into the new housing. Once established the original group was joined by Israeli families and new immigrants from England, South Africa and New Zealand.

In October 2008, the Government decided to establish a memorial site in Neve Ilan for Rehavam Ze'evi (Gandhi). Following this decision, Prime Minister Ehud Olmert and Tourism Minister Ruhama Avraham Balila and the Zeevi family visited the historic site at Neve Ilan.
A presentation was made for the visitors what the site would look like after the renovation and restoration.
Because of a disagreement between Moshav Neve Ilan and the Gandhi family, the government decided, in resolution No. 3779 of October 30, 2011, to transfer the Gandhi Heritage Center from Neve Ilan to the Khan at Sha'ar Hagay. 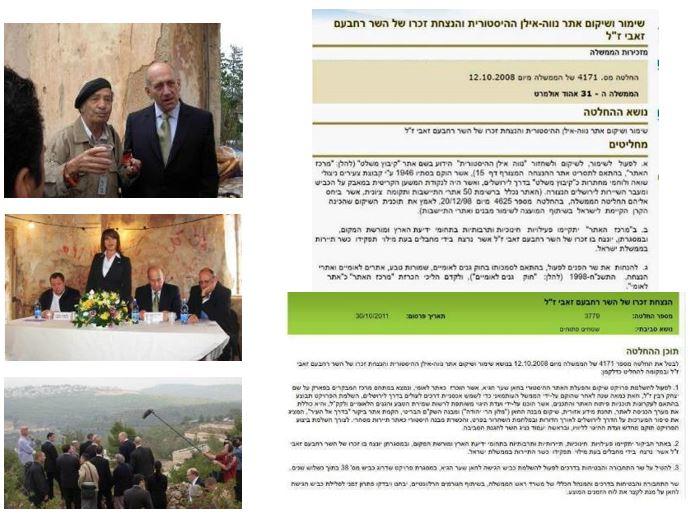 The mukhtar 's house was used during the time of the Kibbutz Neve Ilan outpost as a dining room, a conference hall and during the War of Independence as a clinic . The building was now dilapidated with much of the iron fortification stolen and structurally was dangerous. 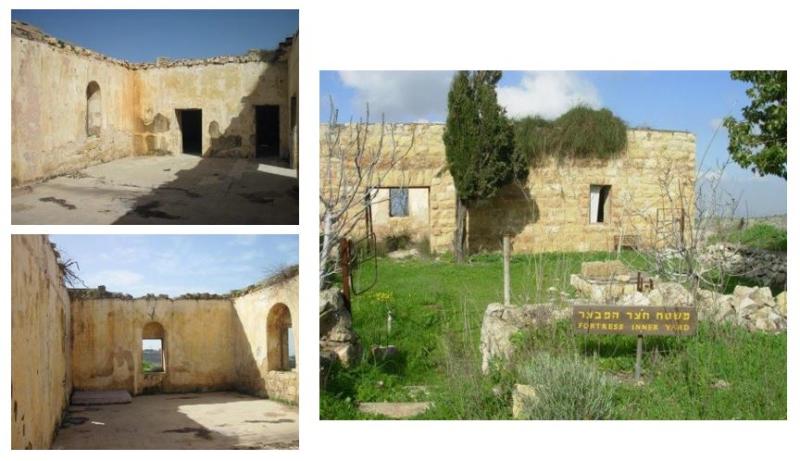 In 2015 the Effendi house was renovated by the Counsel for the Conservation of Heritage Sites in Israel at the cost of more than half a million shekels. A plan was prepared for the reconstruction of the two original huts.

The founders of Neve Ilan wanted their settlement to be incorporated into the kibbutz movement. Despite the cooperative structure, they were not accepted because they did not have a communal dining room nor children's houses (which was still in effect at that time in most of the kibbutzim). Therefore at first Neve Ilan belonged to the Moshav Movement and only later joined the United Kibbutz Movement (Takam). 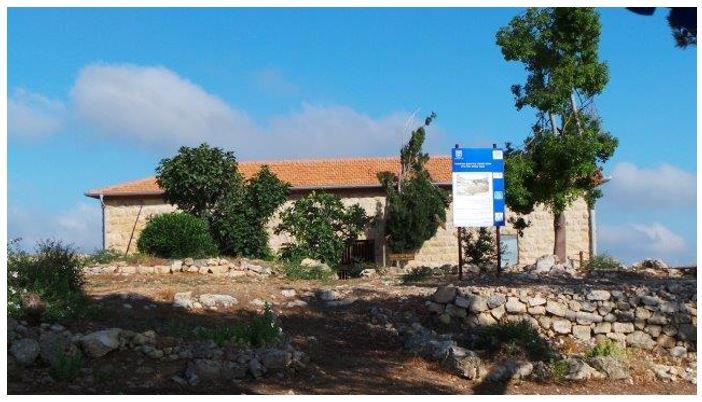 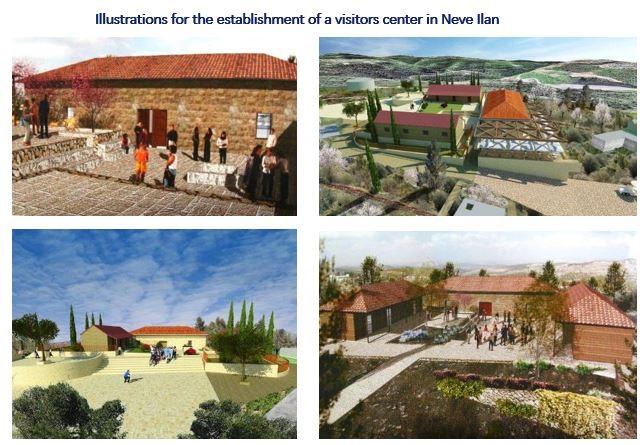 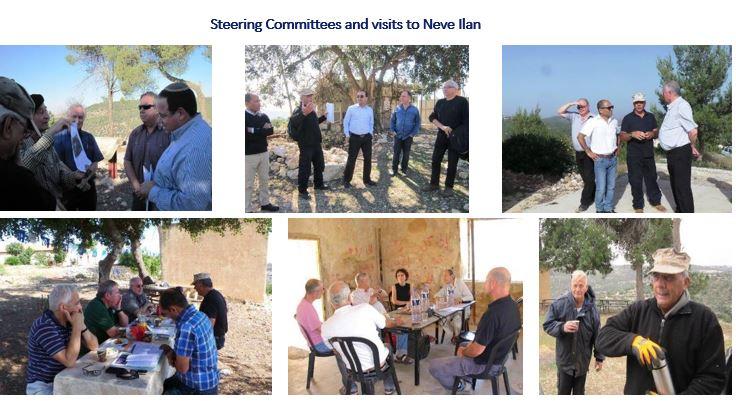